John op 5 feb. 2018
Ik kan mevr Claudia Kötzer wel wat informatie aanleveren over de familie van haar grootvader Paulus Engeln in Purmerend. Wellicht heeft iemand anders haar al geholpen, maar anders kan ze me mailen. Ik heb hier zijn inschrijving in het bevolkingsregister van Purmerend, een familie van kramers en winkeliers, gevestigd op het Padjedijk. Zijn grootvader was geboren in 1817 in Mesum, Pruissen. groet John
BB op 17 aug. 2016
Paulus Anthonius Engeln was born in Purmerend (Amsterdam area) on 30-01-1902. He was married to B.L.L. Wanger and lived at the Bredestraat 37 in Maastricht, in the south of the Netherlands. They had 3 children who were 4, 7 and 12 years old in 1942, the year Paulus Engeln was arrested by the Sicherheitsdienst/SIPO. Paulus Engeln was arrested in the summer of 1942 for possesion of an illegal newspaper ("Besitz verbotene Zeitung" says German document). On 30-10-1942 he was transported from Holland to Germany and arrived at K.L. Buchenwald were he was registered under 'haeftlingnummer" 208. On 2-3-1944 a large group of Dutch prisoners were transported to K.L. Natzweiler in the Elzas (France today). It is very likely that Paulus Engeln was with them too. He was registered in K.L. Natzweiler under number 7779. Paulus is a prisoner that is marked for the so called Nacht- und Nebelerlaẞ"". Nacht und Nebel was some sort of law for a special group of prisoners that 'Chef des Oberkommando der Wehrmacht' fieldmarshall Wilhelm Keitel installed on orders of Adolf Hitler during WW2 to let people of the resistance disappear without a trace. These prisoners were treated barbaric and could not have any contact with their relatives of write letters nor receive mail. As the allied troups advance into France and come close to K.L. Natzweiler, the SS decide to evacuate the camp and on 6-9-1944 Paulus Engeln is also moved to K.L. Dachau. Here he is registered as prisoner 100905. One week later he is moved again this time to K.L. Mauthausen (Austria) where he works in Kommando Ebensee and dies on 27 april 1945, a week before the camp was liberated.
BB op 17 aug. 2016
The picture is a foto of the house with shop at the Bredestraat 37 in Maastricht where Paulus Engeln lived and possibly had a shop. The house is marked as an official monument. The occupation of Paulus Engeln was "kaufmann" / salesman which could mean he ran a shop in this building and lived there also. 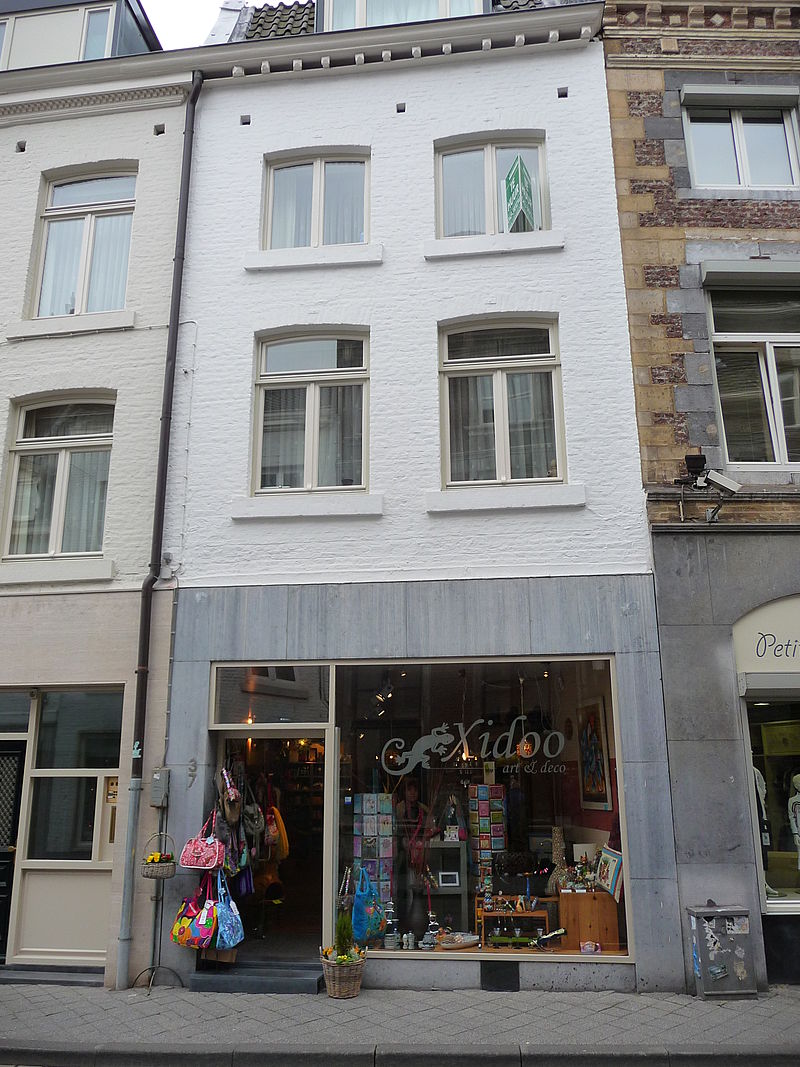 BB op 17 aug. 2016
* Because Paulus Anthonius Engeln also was a prisoner in KZ Buchenwald, it is recommended to contact ITS in Bad Arolsen. KZ Buchenwald is one of the camps of which the archives are well kept. The website is: https://www.its-arolsen.org/
Claudia Kötzer op 9 mrt. 2016
Paulus Engeln was my grandfather. I am from Germany and i am looking for any information I could get from my grandfaher. its very difficult for me to search in the archives, because I cannot read dutch. So I m graetful for every hint.